Orange County REMC lineworker Robert E. White joined a crew of 15 other Indiana electric cooperative linemen who traveled to Guatemala in mid-March as part of an international initiative to bring electricity to a developing area.

“Project Indiana: Empowering Global Communities for a Better Tomorrow” brought electricity to a part of the Central American country where none is available. The crew spent the second half of March electrifying the village of El Zapotillo (in Cuilco, Huehuetenango). Because of their work, approximately 50 homes, a school, a clinic and a church now have electricity for the first time.

White joined Orange County REMC in August 2006 as a groundman. He became a journeyman lineman in 2012.

“Orange County REMC is very proud to have Robert White represent the co-op on this trip,” said Matthew Deaton, general manager/CEO. “Robert volunteered for this trip, which says a lot about the character and love for this job that he possesses. He shows through actions a true cooperative spirit.”

This is the Indiana Electric Cooperatives’ third trip to Guatemala. In August 2012, 28 Hoosier lineworkers from 17 of Indiana’s electric cooperatives, including two from Orange County REMC, spent four weeks working across the mountainous terrain to construct more than 20 miles of power lines and bring electricity to three villages. In April 2015, 14 lineworkers battled extreme heat and the rugged land to string 11 miles of wire to connect 76 poles across 2,500 feet of mountains. 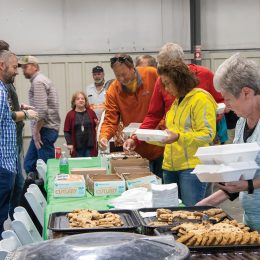