Anyone who’s ever had cats knows they are creatures of both habit and keen curiosity.

Evan Olinger never has had a cat; he and his older brother are allergic to them. Still, the high school sophomore won his fifth consecutive grade division in the Cooperative Calendar of Student Art contest in March by modeling the modus operandi of the furry feline he illustrated to win.

Much like a cat, Evan stuck to the familiar —  his favorite medium of colored pencils he’s used to garner awards every year in the Indiana electric cooperatives’ contest since he was a sixth grader. But he continues to curiously explore and venture into new subject matter. He noted he’d never drawn a cat before. “It was all new,” he said. “I like doing that with contests.

“Cats are cute, so I just wanted to draw a little kitten,” Evan said. “I wanted to display that kittens are playful. They would be the type of animal to get inside a pumpkin. They’re adventurous.”

Last year, the illustration Evan created for September of his dog, Doodle, was one of the first dogs he’d ever drawn. “I just don’t do animals that much. It’s fun to branch out, though.”

Evan’s illustration of the soft, green-eyed kitten poking its head out of a jack-o’-lantern not only won for the month of October in the upcoming 2019 calendar, but contest judges selected the work as “Best of Show.” “Evan’s work quickly caught the eyes of everyone in the room with its skillful execution,” said one of the judges, Justin Vining, a professional, Indianapolis-based artist and former elementary school art teacher who was profiled in the February 2018 Electric Consumer.

“His drawing exhibits an under-standing of medium, composition, and color beyond Evan’s age, which made him the clear front runner,” Vining added.

Evan said he wrestled with some early decisions about the cat illustration. “I thought about making it a black cat,” he noted.

While that may have enhanced the Halloween theme, he said black cats have been done so often, and the choice of black may have diluted the detail he wanted to render.

“I thought it would be more visually appealing and vibrant to go with the colors I ended up using,” he said. “The textures and details may have not shown up as well either if I drew a black cat because using too many layers of dark colored pencils sometimes results in smudging and makes the details look fuzzy.” Evan is an avid comic book collector and a fan of Batman and other comic book and movie heroes. He adorns his “artist studio” — a corner of the basement family room — with a myriad of sketches and artwork he’s created and Batman and other hero figurines he’s collected.

This is Evan’s second “Artist of the Year” designation. His first was as a seventh grader for the month of July in the 2016 calendar. Only one other artist in the contest’s 21 years earned the “Artist of the Year” title twice, and Evan is the only artist to have won his grade division five times. And, with two more calendars to go, the Silver Creek High School 16-year-old may not yet be done.

Despite the success he’s had in the cooperative art contest and others he’s entered through school, Evan remains both competitive yet modest. He entered two works in the calendar contest this year out of self doubt. Along with the “cat-o’-lantern,” as he called it, he also drew an old rusting Volkswagen Beetle amid fall foliage. The judges ended up debating which of his two illustrations to choose for first.

Evan said he was uncertain how the Volkswagen, his first try, would be received. So he started the cat illustration. “Honestly, I just wanted to try to get five years in a row,” he said. “I was just trying to make the chances a little higher.”

Read about the contest for the 2019 calendar 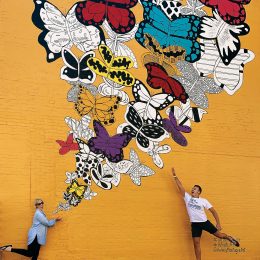