By Indiana Connection
Posted on Oct 27 2021 in Travel

Bob Ross was a man who could move mountains at a whim. He could conjure clouds from a pale sky and raise lofty pines with waves of his hand. And he inspired and convinced many others they could do the same.

The soft-spoken artist with the bushy hair became a Public TV icon in the 1980s-’90s through his show, “The Joy of Painting.” In each half-hour class, he taught viewers how to create beautiful landscapes. And though Ross died in 1995, his gentle demeanor, calm voice and upbeat attitude ensured his enduring popularity.

“This is your world,” he’d tell viewers as he’d stand at his easel, “and you can create anything you want in it.”

Now, his fans and followers can stand before that very  easel in the exact spot where he stood as they enter his “happy” world — the “Bob Ross Experience” — at the Minnetrista museum in Muncie.

Ross filmed every episode of the “The Joy of Painting” at Muncie PBS station WIPB-TV. And from the show’s beginning in 1983 to 1988, the WIPB studio was the living room of the former home of Lucius L. Ball. The home today is part of the Minnetrista campus, a 40-acre museum and gardens.

For each show, Ross would stand before an empty canvas mounted on an easel and greet his TV audience. A black curtain was the background. Then, he’d quietly paint, instruct and chat about art and life. Seemingly after a few dabs of paint here, daubs there, and thwackings of his big brush against the easel for cleaning, he’d have a finished work. More importantly, viewers were encouraged to try it, too.

Phase I of the Ross exhibit opened Oct. 29, 2020, which would have been his 78th birthday. It recreates that living room studio — black curtains, TV cameras and easel. Displayed is an original Ross painting and the brushes he used.

The interactive exhibit continues to a recreated 1980s living room where visitors can plop down on a couch with a console TV and continue learning his story.

Ross was a native of Florida who traveled the country giving seminars on his simple approach to painting and sharing his philosophy of “fearless creativity.” Ross happened to be in Muncie giving multiple sold-out seminars when he approached the folks at WIPB-TV about bringing his instructions to a broader audience through a TV show. The station agreed. And, from the heart of Muncie, within just a few seasons, Ross had become another endearing, kind of quirky, PBS personality nationwide. He was like the grownup’s answer to Mr. Rogers.

Phase II of the Bob Ross Experience opened this Oct. 29, expanding to the home’s second floor. Visitors can now view a larger gallery of his paintings and paint in workshops in the same home where he painted for his show. So, if you go, as Ross might have said, “Happy traveling, and God bless.” 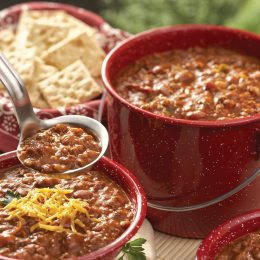 All aboard for chili!