The Saratoga: A Terre Haute institution

By Indiana Connection
Posted on Jul 02 2019 in Indiana Eats

Family-owned restaurants are a rarity in these days of chain eatery domination. But The Saratoga in downtown Terre Haute has been lovingly run by the Malooley family since 1942.

Back then, Joe Malooley purchased the restaurant from local attorney George Nasser. Nasser was the brother-in-law of Joe’s brother, Abe. When Abe returned home from serving in World War II, he joined Joe in the restaurant business.

The Saratoga’s corner location at Fifth Street and Wabash Avenue was the same corner that Abe sold newspapers at when he was a boy. Through the years, other family members began making their mark at The Saratoga. Now, besides Abe’s daughter, Cathy, and her husband, George Azar, their daughter, Alexis, and her husband, Dustin Green, are all part of The Saratoga family.

The restaurant’s menu is eclectic. Salads and sandwiches, including some innovative takes on burgers and the generously sized breaded tenderloin, comprise the lunch menu. Dinnertime selections include steaks, chicken, pork chops, pasta and seafood as well as the overwhelming fan favorite menu item — a delectable prime rib. But what you might not expect are the Middle Eastern menu choices like Kibby, made with ground beef and bulgur and stuffed with sautéed beef and onions; the Mediterranean staple, falafel, served with all the trimmings on pita bread; and gyros.

State Sen. Jon Ford of Terre Haute is one of Saratoga’s regulars. Besides the tasty cooked-to-order food, he appreciates the family-friendly atmosphere and the friendly staff.

Those wanting to treat their guests to The Saratoga experience offsite can work with the restaurant’s catering business, Azar’s Catering. Restaurant favorites and a wide array of other specialties are available to fit your food preferences and budget. Like The Saratoga, Azar’s Catering has a long track record (40 years) of making sure Wabash Valley residents are well fed and feeling like they’re part of the family. 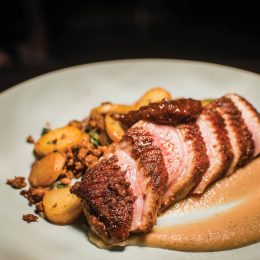 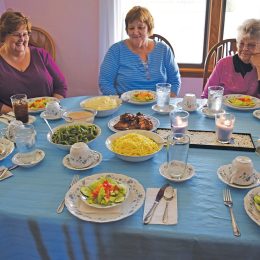 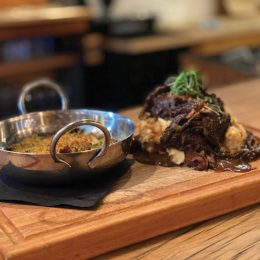