The meeting was opened by Chairman Michael Brelage and Brian Scheidler kept the minutes of the meeting.

All board members were present. Also present were CEO Brett Abplanalp and employees Eric Busch, Sam Ruf and Crystal Greathouse.

Upon motion made by Steve AmRhein, seconded by Dale Wernke and carried, the agenda was approved.

A video for the United Fund Campaign was shown and is posted to the DCREMC website. An opportunity to donate was presented.

Upon motion made by Wernke, seconded by Suzanne Parmer and carried, the minutes for the Sept. 24, 2020, board meeting were approved with amendments made.

Brelage asked the board if there were open questions concerning an operations rebuild project. Carl Riedeman asked a few questions that were asked of him by members questioning the need to replace certain poles. Abplanalp explained that the age of a pole is not the only consideration that has to be taken when replacing poles and building plant.

Ruf presented the current IT strategy and security measures that he has implemented.

$60,813 was asked to remodel the front office and drive-up window for security and practicality purposes. Upon motion made by Wernke, seconded by Jason Barnhorst and carried, the $60,813 ask was approved

The bill print redesign was presented. Every class’ bill was shown and explained.

The CEO report was reviewed as presented on Call to Order. Abplanalp explained his management team has been focused on the 2021 budget and preparing for our union negotiations. The project updates were reviewed, including the completion of the new bill print design and a successful Breakfast with Brett at Stories Restaurant. Abplanalp then reviewed the monthly dashboard metrics.

The financials were reviewed as presented on Call to Order. For the month of September 2020, operating margins were at $3,648 compared to a budgeted loss of ($108,407). Year-to-date operating margins are at $1,009,616 compared to a budget of $505,768. The variances to budget for September and YTD continue to be primarily related to controllable expenses being under budget. There are various reasons for the controllable expense variances, with the largest individual cause being COVID-19. A summary of the cash position through September and cash projections for the remainder of 2020 were reviewed with the board.

We next reviewed a memo describing the 2020 cash/margin surplus options. Upon motion made by Parmer, seconded by Jeff Lawrence and carried, a $50 COVID-19 relief credit will be applied to every member’s bill contingent on legal advice, and $21,185 for right-of-way mowing was approved.

Redlines for policy 1-8 director fees and expenses was presented.

Upon motion made by Barnhorst, seconded by Lawrence and carried, the redlines were approved.

Upon motion made by AmRhein, seconded by Wernke and carried, the annual meeting will be held on June 11.

A plan for the normal capital credit retirement in 2021 was presented.

Brelage asked for at least one director to make it to the negotiations on Nov. 10 and possibly Nov. 12 if a second day is needed. AmRhein was the only one who could definitely commit to the dates presented.

Hoosier Energy’s rating was moved from stable to positive. Projected wholesale cost is to be down seven percent through 2024. The CEO evaluation was completed.

This month’s meeting was virtual. The CEO wants to attend local board meetings so he may be at one of ours in the next year. The 2021 budget was approved with no increase.

Upon motion made by Scheidler, seconded by Wernke and carried the meeting was adjourned to executive session at 9:30 p.m. 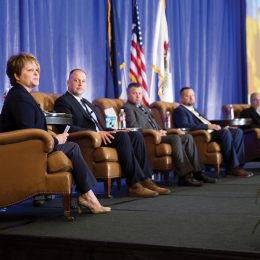