In just two short months, Dr. Douglas Arnold will retire from his position as superintendent of Maconaquah School Corporation where he has spent his last eight years. Arnold began his 43-year career in education at St. Joan of Arc Junior High School in Kokomo in 1975 where he taught social studies. His career has taken him to multiple school locations in both Indiana and Ohio in positions that include teacher, assistant principal, principal, assistant superintendent, superintendent and director of elementary education. He is a graduate of Indiana University and received his doctorate from the University of Cincinnati.

The right opportunity and timing just came together to bring them to Maconaquah in 2010. At the time of his move, he had been the principal at Kokomo High School. He believes that with the collaboration of the assistant superintendent, school board and other school administrators, the school corporation has been able to accomplish some great things during his time there, especially in the area of technology. Maconaquah has become a leader in North Central Indiana when it comes to one-to-one technology for students, Science Technology, Engineering and Math (STEM) curriculum and the offering of E-learning days.

Arnold said that any superintendent would say that the most challenging part of his/her job is funding. The Indiana General Assembly has stated that funding for schools would be driven by student population. Because of this, public relations has become a priority for school corporations as they now must “market” their schools to both students and parents.

When asked how students have changed during his career, he said that most things haven’t changed a lot but that social media has magnified some of the issues. For example, there has always been bullying, but social media has provided a platform to intensify it.

In his retirement, Arnold would like to do some consulting, university teaching and possibly fill some temporary superintendent positions. He and his wife, Julie, are also looking forward to being closer to their two granddaughters and spending time with them.

A lover of the outdoors, Arnold is looking forward to more time hiking, biking and canoeing with his wife.

He and his wife also love the theatre. They met in the Kokomo Civic Theatre where they were both dancers in “Fiddler on the Roof.” Their love of the theatre continues, and they make an almost yearly pilgrimage to the Stratford Shakespeare Festival in Ontario, Canada.

The current assistant superintendent, Dr. James Callane, will take over the duties of superintendent on July 1. Arnold said that if Callane continues his student-centered approach to teaching and learning, that he will be successful in this position.

The staff and directors of Miami-Cass REMC would like to thank Arnold for his dedication to the community while serving as superintendent and congratulate him in his retirement. We would also like to wish Callane well as he begins his new endeavor. 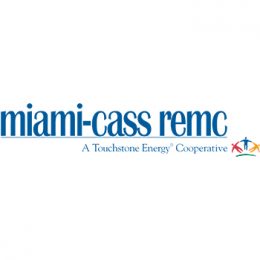