my trip of a lifetime on an honor flight

The Honor Flight takes two to four trips a year, to Washington, D.C., so that veterans can view the memorials dedicated to them. As a sponsor, a photographer from one of the regional co-ops travels on the flight to document the day through pictures. Each veteran is then presented a photo book commemorating the trip to D.C.

I was honored to accompany the veterans on Sept. 14. It was truly a memorable experience. Veterans arrive at the 122nd Air National Guard base in Fort Wayne around 5 a.m. to check in, have breakfast and get ready for the adventure.

We boarded an American Airlines Airbus A321 for a one-hour flight into Ronald Reagan National Airport and were greeted by other travelers who paused to applaud the veterans as they exited the plane into the terminal.

Four motor coaches were waiting for us to tour the memorials around D.C. Our first stop was the World War II Memorial. A group photo of the 85 veterans at this memorial is seen above. We ate lunch around the FDR Memorial before heading off to visit the Korean, Vietnam and Lincoln memorials.

As there were quite a few veterans that served during the Korean and Vietnam wars on this trip, that stop was especially touching. Seeing our heroes find the names of their brothers in arms who did not make it home on the walls of those memorials isn’t really a feeling that can be portrayed in a photograph. You could sense the conflicting feelings of gratitude for being there and the tremendous sorrow for those whose names they were reading.

We continued with a driving tour of Washington, D.C., circling the Iwo Jima Memorial (dedicated to all Marines who have given their lives in defense of the United States since 1775) and visiting the Women’s Memorial.

The next stop was at Arlington National Cemetery. The vets were able to view the cemetery for a few minutes before we took our place at the Tomb of the Unknown Soldier to witness the changing of the guard. It’s a ceremony unlike any other and the amount of professionalism and detail will always stick out in my memories of that day. The tomb has been guarded every hour of every day since 1937. A couple of the veterans were able to present a wreath to the servicemen to be placed at the tomb.

The four buses then loaded up and headed to the Air Force Memorial where we ate dinner and were welcomed by a group of students from Van Wert, Ohio. The class was on the last day of its Washington, D.C., trip and was gearing up to leave when the Honor Flight Veterans showed up.

The kids decided to line the sidewalks to cheer and clap as the veterans walked through. It was a tremendous gesture by the students that the veterans truly appreciated.

The memorial is breathtaking, overlooking the Pentagon, with the rebuilt portion visible from the crash of Flight 77 on 9/11.

The flight back to Fort Wayne was icing on the cake for these veterans. In what Honor Flight has branded as “Mail-Call,” each veteran was gifted with dozens of letters from family members, friends and students thanking them for their service.

The letters had been gathered in the weeks prior, unbeknownst to the veterans. While reading the letters, some reactions were smiling and laughter and some were somber, perhaps finally realizing the gratitude that was bestowed upon them.

It was a long day. It was a great day. Hopefully, these veterans who signed their name many years ago, pledging their life to our country, felt just a small fraction of the gratitude they deserve.

For more information about Honor Flight or for more photos, visit https://www.hfnei.org/.

Nic Engle is the marketing and public relations coordinator at LaGrange County REMC.

We’re so thankful for you, our members 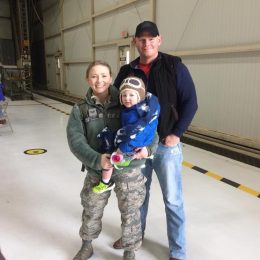