Founding member of Operation Round Up board retires - Indiana Connection

Founding member of Operation Round Up board retires

For more than two decades, the Operation Round Up Trust has been giving financial hope to area non-profit organizations. Helping their community and its residents in need have always been the prime motivators for the co-op member-consumers who lead this unique organization.

Board President and Director Dolores Surfus, a 20-year veteran and founding member of the Operation Round Up board, has proudly overseen over $1 million in grants through the years. Surfus chose that milestone occasion to announce her retirement from the board.

Surfus remembers the moment when she was asked by a sitting KV REMC director to be part of the board. “He said the co-op was starting a new organization that will support non-profit organizations through grants funded entirely by the membership,” Surfus said. “He said with my community involvement, I’d be a perfect fit for the board.” Surfus was immediately intrigued by the Operation Round Up concept and was thrilled to have been a founding member of the board.

The Operation Round Up Trust is governed by seven volunteers representing each of the co-op’s five districts and two at-large districts. The board members review and approve grant applications, and decide — in accordance with the bylaws — what their funding levels should be.

Awarding grants was a treasured highlight of her time on the board, Surfus said. Yet, it wasn’t the only one. “I enjoyed learning from my fellow board members,” she said. “The board was unique because we all had very diverse backgrounds. What one person didn’t know, another one did.” She noted the communities and organizations were well represented. “What I learned while serving on the board will help me as I continue to volunteer in the community.”

In addition to her involvement with the co-op, Surfus has served as a 4-H leader for 34 years. She is also on the Indiana Farm Bureau board of directors and has worked in the Knox School system for 25 years.

“Dolores has championed the co-op mission of concern for the community through her work on the Operation Round Up board,” KV REMC CEO Scott Sears said. “We appreciate her dedication and involvement with the co-op.” 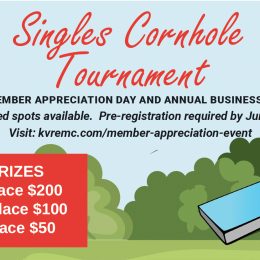