It’s safe to say that Ron Singleton was born with electricity flowing through his veins. Back when Kankakee Valley REMC began stringing lines across our part of Indiana, Ron’s father was an electrician who helped his neighbors connect to that “newfangled” power. The REMC has always been part of his life, and 30 years ago, he decided to run for our board of directors.

This April, Ron retires from the board after three decades of service. While he’s excited about this new chapter of his life with his wife, Brenda, he will miss working with his fellow directors, KVREMC staff and the REMC’s members. Ron will also miss attending industry conferences, learning from his peers at other cooperatives and bringing new ideas back to improve our services.

“The elected men and women who serve on the Kankakee Valley REMC board do their best for the business of the cooperative and for the members,” Ron said. “As we sit around the table during our monthly meetings, decisions are made with the members in mind. Doing what is best for them is our top priority.”

Ron’s proudest accomplishments as a director were the establishment of the Operation Round Up program (which passed the $1 million mark last year) and the building of our current headquarters facility. A leader in the industry, he has received his Credentialed Cooperative Director designation and his Board Leadership Certificate from the National Rural Electric Cooperative Association (NRECA). Ron also earned his Director Gold status from NRECA.

“My mom was so proud to have her son become an REMC director,” he recalled with a smile.

Ron, who farmed for 25 years, retired as a motor sergeant from the U.S. Army Reserves. He’s a great-grandfather, has four grandkids and five children, and was one of just five Indiana Moose Lodge members to receive the organization’s highest honor, the Pilgrim Degree of Merit Award, in 2016.

Thank you, Ron, for your service.

Looking back: Hurricane, information and kids 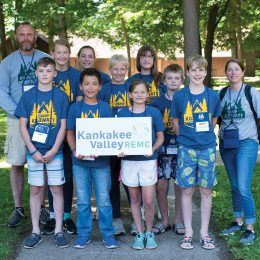