By Indiana Connection
Posted on Mar 24 2021 in County

Arbor Day is celebrated on the last Friday of each April. But one Indiana county holds a special place in its heart for a tree that towers daily over the county’s affairs — an attraction that has been around for over 150 years.

That county is Decatur County. That tree is none other than “The Tower Tree” that grows right out of the roof of the clock tower of the county courthouse in Greensburg.

“It’s almost certainly the thing that Greensburg and Decatur County is best known for,” said Philip Deiwert, executive director of the Decatur County Visitors Commission. “I get frustrated sometimes that some of the other things I think are great about our community seem to get overlooked because of the tree — which is kind of fluky. But it is an attraction, and people are definitely curious about it. Almost every day I see people park their cars and get out and take pictures of it.”

This tree, or rather it and its many predecessors, has been mentioned in publications throughout the world and on TV shows like the old “Ripley’s Believe It or Not.”

How the trees ever started growing or how they have continued for 150 years is somewhat of a happenstance and mystery. Deiwert explained that the tower’s four-sided pyramid roof is mostly an ornamental cover. The tower’s actual roof is an arch of bricks just above the clock face. “There’s space above that brick domed ceiling and the exterior roof where the roots of the tree grow,” he said. “That space is reportedly full of dirt and soot and bird and bat guano — all stuff with good nutrients for the tree.”

As early as 1865, according to some reports, when the courthouse was only 5 years old, a tiny sprig was first noticed growing out of the roof of the 115-foot tower. Definitely by 1870, the public began taking note as finally five sprouts were seen springing up at different places around the top of the tower.

Fearing the trees would cause permanent damage to the roof or the tower, the county hired a steeplejack in 1888 to ascend the building and remove some of the trees, but not all, since they had already become quite an attraction. Two were left standing. Over the passing years, sprigs and trees died off and others continued popping up to continue the quirky attraction.

The current tree, a mulberry, is estimated at 50 years old. Early last fall, a large crane was brought in to hoist a county arborist on a platform to inspect the tree and prune some dead limbs. While the tree is reportedly doing OK, a 3-year plan was put together and implemented this spring with the hope of nursing the tree back to full health. That will ensure the “World Famous Tower Tree” will continue making Decatur County the “Tree County” for many more years to come.

Of note: When traveling between Indianapolis and Cincinnati on Interstate 74, look for brand new signs that say, “World Famous Tower Tree” with the Greensburg exit numbers. It’s hoped the billboards will entice travelers off the highway to check out the Tower Tree, and then, while there, they’ll get lunch or a cup of coffee, or go into some of the shops and businesses around the courthouse square. 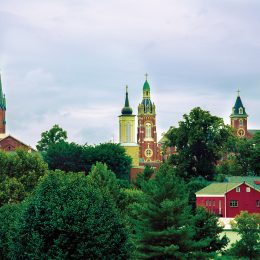