Birds and animals once again dominated the winning themes of the Cooperative Calendar of Student Art contest. The 13 first place winning works will illustrate the cover and the months inside the 2019 calendar participating Indiana electric cooperatives make available to consumers.

Nine additional works were selected for honorable mentions. They will appear in a special four-page section of the 21st edition of the calendar that will be available in early autumn. The contest was open to Indiana students, grades K-12, and judged in late March.

Leading the animal parade is the kindergarten cover work, a puppy with one blue eye and one brown eye. Bright red cardinals are frequent visitors to Hoosier backyards in winter, and the 2019 calendar will feature another in February. In April, the calendar sights its first-ever hedgehog. A big pink pig wins the blue ribbon both at the fair and for July’s seventh grade division. A dog in the arms of a young girl brings in the “Dog Days” of August.

A curious little kitten pokes its head out of a jack-o’-lantern and into October. The work by 10th grader Evan Olinger not only won Evan an unprecedented fifth consecutive grade division but also earned the Silver Creek High School sophomore his second “Best of Show” designation. (Please see Evan’s story.)

The year rounds out with December and a feathery white chalk owl on black paper.

Honorable mention-winning entries continued the animal theme with a polar bear for January, a bluebird for March, and two more cats for August and September.

The contest brought in about 2,200 entries this year. In the 21 years the contest has been held, beginning with the 1999 calendar, some 89,010 pieces of art have been entered in the contest.

Cash prizes were $200 for all grade division winners and $50 for honorable mention winners. Evan Olinger, the Artist of the Year, earned an additional $100. Some 300 other students will each receive an “Award of Merit” certificate for their work which advanced into the final phase of judging in their respective grade division.

Along with Evan, other repeat grade winners this year included:

Another first of note: twin sisters won a first and an honorable mention in the same contest. Clare Kramer of New Salisbury won the eighth grade division, and sister Eva won the honorable mention.

A reception for all 22 winners, their parents and art instructors, sponsored by Indiana Electric Cooperatives and Hoosier Salon, will be held in conjunction with the Hoosier Salon’s annual exhibition. The Salon’s exhibit will be held at the Indiana State Museum in downtown Indianapolis in August. 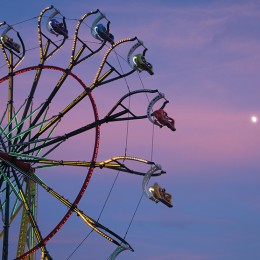 Join us for Member Appreciation Day