he 2020 Annual Meeting of the membership of the Kankakee Valley Rural Electric Membership Corporation was held at the Porter County Expo Center in Valparaiso, Porter County, Indiana, on the 10th day of September 2020. A catered meal was served beginning at 4:30 p.m. CDT. Recipients were asked to receive their pre-packaged meals via drive-through service provided by REMC employees and Board members. 45 RPM, an Indianapolis cover band, played on the outdoor stage from 5:00 to 7:30. Attendees were invited to park in the back of the Expo Center and remain in their vehicles in sight of the stage. A corporate highlight video was played on the outside stage. The business meeting began at 7:30 p.m. CDT, pursuant to notice provided to each member of the Corporation included the announcement of Election results and prizes awarded.

A copy of the proof of mailing of the Notices and Secretary’s Affidavit is appended as EXHIBIT A, at the end of these minutes and was included in the member program distributed to each member who appeared and registered at the meeting, it was also available in the September member newsletter and on the corporate website.

The business meeting opened, and the first matter of business was the consideration of the notice of the meeting. The reading of the Notice of the Meeting to Members as provided in Bylaw Art. III Sec. 3, was waived and dispensed with after a motion duly made and seconded carried on a unanimous vote. The next item on the agenda was the reading of the minutes of the 2019 annual meeting. On motion duly made and seconded, the membership resolved to waive reading of the minutes. Then, on motion duly made and seconded, the minutes of the 2019 annual meeting were approved as printed in the program, on vote. This was the second year that the Board approved early voting which was available by mail or online. The amendment to the enabling law provides a person who intended their vote be counted at the annual meeting, are also counted for purposes of a quorum. The preliminary report, once made available, showed a quorum was reached during the online and vote by mail balloting. Moreover, 619 members also appeared in person at the annual meeting. Bylaw Art. IV Sec. 4(d).

The membership had been advised during the early voting period and at the annual meeting that there were two directors’ seats up for election at this annual meeting for terms of three years each or until their successor shall be duly elected and qualified. The candidates were selected by obtaining nominations by petition pursuant to the bylaws of the cooperative.

All members had been given instructions to carry out the membership voting. Voting could be accomplished online, by mail and in person at the annual meeting.

In accordance with Bylaw Art. IV the following candidates were nominated for election by petition in Districts 4 and At-Large (6).

Due to an amendment to Bylaw Art. IV Sec. 4(d), Michael Yankauskas, by virtue of his being unopposed, was elected by the membership on voice vote. On motion duly made and seconded, Michael Yankauskas was duly elected to the position of Director of District 4 for the ensuing three years.

The election inspectors, aided by KVREMC employees, counted the votes cast for the election for the At-Large position where Andy Blastick and Russell Guse were on the ballot by virtue of their nomination. Ballots were counted and added to the premeeting voting and the total results showed: Andy Blastick with 1,214 votes and Russell Guse with 1,275 votes. Thus, Mr. Guse was duly elected director on the Board of Directors for the At-Large District for the ensuing three years or until their successors have been elected and qualified. The results of the election to the board for District 4 and the At-Large District were duly certified by the Election Inspectors and the prevailing candidates are as reported above.

The Certificate of Election Inspectors is available to member-consumers upon request at the KV REMC office.

CEO Sears announced prize winners which included anyone whose registration card was selected regardless of whether or not the member was present at the time of the drawing.

The chairman called for any other business or new business to be brought to the attention of the membership; there being none, the meeting was duly adjourned.

State of Indiana, County of LaPorte

I, Susan Bachert, being first duly sworn, upon her oath deposes and says:

That she is the duly elected and qualified Secretary of the Kankakee Valley Rural Electric Membership Corporation, hereinafter called the Cooperative. That on the 7th day of August 2020, she mailed to each member-consumer of the Cooperative, to the addresses as they appear on the records of the Cooperative, a notice of the annual meeting of the members on September 10, 2020 by depositing such notice with postage pre-paid thereon and addressed as aforesaid in the United States mail, and that the attached copy of the notice is a true and correct copy of such notice mailed as aforesaid.

Subscribed and sworn to Susan Bachert, Secretary before me this 7th day of August 2020 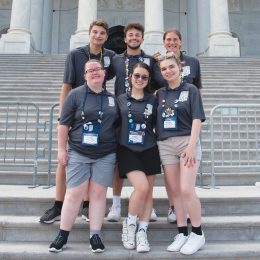 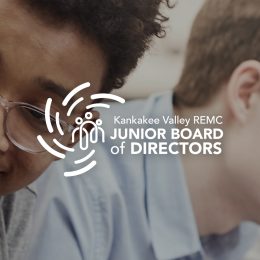