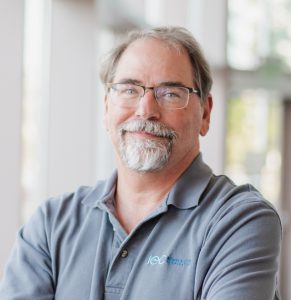 Senior editor Richard G. Biever writes and photographs many of the cover and feature stories that appear in Indiana Connection.

Over his 30 year career with Indiana’s electric cooperative publication, his work has garnered more than 180 awards from various communication, cooperative and industry organizations for writing, photography and graphic design, including four coveted “Writer of the Year” awards from the Cooperative Communicators Association.

As editors of the publication, Biever and editor Emily Schilling also won two prestigious Haggard Awards from the National Rural Electric Cooperative Association given annually to the best, most forthright electric cooperative publication supporting the nation’s electric cooperative program. The duo also conceptualized and created the Cooperative Calendar of Student Art contest in 1998 and have coordinated the project each year since. The art project has also earned multiple awards and almost 90,000 pieces of art from Indiana students, grades K-12, have been created and entered in the contest since its beginning.

Biever joined Indiana Connection (then Electric Consumer) in December 1988 and is a Certified Cooperative Communicator. Before that, Biever was a photographer, writer and graphic artist for a suburban Indianapolis newspaper. He graduated Phi Beta Kappa from Indiana University in 1984, where he majored in journalism and minored in fine arts-graphic design.

He is married, has two adult children, and resides in Avon, Ind.

View Our Staff
Learn About Us